Facebook treated me with a great memory today. The photo is me and my buddy Tommy each with our first longbeards on Fort Benning Georgia. We were at a 5 month course there with our buddy Clint. Clint is a lifelong turkey hunter and introduced us both to turkey hunting in the spring of 2011. I found the birds in this particular area and knew their tendencies after fly down, but didn’t have any calling ability. Clint went to call for me on this morning and we had 2 birds racing to us off the roost. The first showed up in my face and I smooth missed him at 25 yards. Clint was gracious enough not to scold me too much and reminded me that a third bird had gobbled behind us during the early morning ordeal. We went to the top of the hill and he returns Clint’s first run of calls. We set up and within 10 minimum he worked into me in the short pines. I redeemed myself with a good shot and then found out he was a triple beard. Tommy managed to call in and kill his own bird on the other side of the same area. Great morning and great introduction to turkey hunting. Clint took the training wheels off after that and I’ve called every one of my birds over last 10 years on my own. I didn’t know then what addiction had had already slipped into. 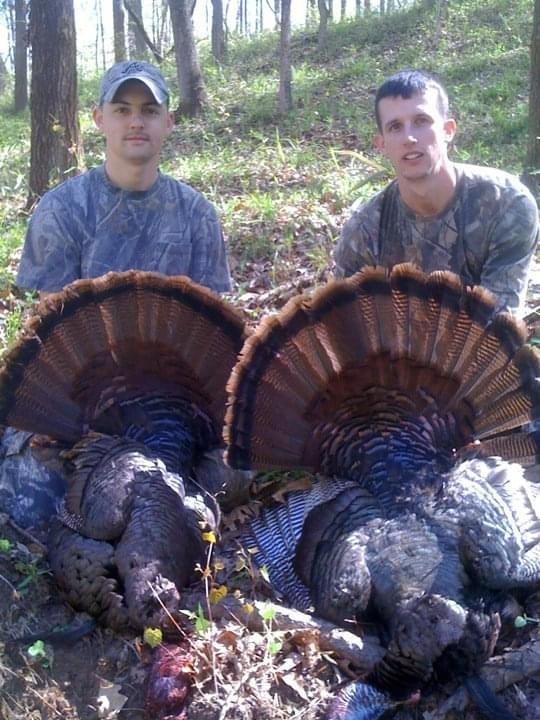 Nice story and picture. Coincidentally I took my first Florida bird on April 3rd back in 2007. I remember the date since it was my mother's birthday. Hard to believe that was 14 years ago. Time flies. Enjoy it. Good luck.
Top

You got off to a great start, good pic and story
Top

Nothing better than being addicted after a hunt like that. Most awesome memory!
“Ego is the anesthesia to dull the pain of stupidity”
Spoken by someone smarter than I
Top

Lot's of memories on that and congrats

MMMMMMMMmnnnnnnn .. mine was 1975 and solo

This May will mark 24 years since my first spring longbeard. My turkey hunting mentor was with me, but after a couple seasons watching and learning, he let me run that hunt start to finish on my own.
"Sit down wrong, and you're beat."
Jim Spencer
Top

23rd season for me. Unfortunately I did not have a mentor other than the great tom turkey himself. I sucked so bad for the first five or six years that I damn near quit. I did kill a turkey my first year though.
El Sicario
Top

appalachianassassin wrote:23rd season for me. Unfortunately I did not have a mentor other than the great tom turkey himself. I sucked so bad for the first five or six years that I damn near quit. I did kill a turkey my first year though.

I swear having a mentor easily cuts several years off the learning curve and am very grateful. I guess the flip side of not having a mentor may be that the first few are more rewarding. After that, it’s probably a wash. I learned a ton from Clint, but know I do some things like him, but many others differently because of things I’ve learned on my own and individual preferences. I know I probably wouldn’t be hunting turkeys now if he hadn’t driven me to. I try to introduce people to turkey hunting. No one I have taken has been willing to put the work in to learn and really gotten into it. I really hope my son wants to hunt and learn when he gets a few years older.

I had a mentor when I first started, only thing was he did not know anymore than I did.....lol. Truly the blind leading the blind. It did not take too long before I realized the fact that he could talk the talk but that was about it.
Birds taught me a lot and I read a few books that I picked up a few pointer and was able to get my first bird.

I had a great mentor and used him to sound ideas off and ask questions every night ! Didn't hunt with him until I had killed a dozen or so mostly because I was afraid to call in front of him . His son and 2 step sons had 8 + years as GA state champions . I learned alot from him and the youngest one , but in the woods it was almost always training wheel less for me . Mostly because I was hardheaded , he told me later in life when I was an adult , he knew I was gona be a good turkey hunter because I was to secretive about them when I was a teenager .
10th Legion legionare !
Top
Post Reply
11 posts • Page 1 of 1