My good buddy of mine as been after me to get into bow hunting. I have almost done it a few times the last couple years but just never did. He said it was the closet to our beloved turkey hunting you could get with deer. Another good buddy gifted me a bow mid September. It was an older Browning. I practiced a good bit and one evening the string broke and it was not worth fixing. I went bought a mid grade Bear bow package and got to practicing.

I have had 3 bucks in range this year but light conditions and trash stopped the shot. Last Friday eve I had a big 10 point at 30 yards but in trash with no shot. His 6th scent kicked in and I watched him stroll off into my dreams. Kind of glad he was not my first with a bow as he would be hard to top.

Any way Saturday morning I got in the stand and had a buck come out around 7:00 am. He has in range but not my lane. After about 10-15 minutes of an agonizing wait and he stepped in my lane. I drew back and got caught at full draw. Had to hold in awkward position for what felt like a hour but was probably 10 seconds or so. He dropped his head so I put it on him and squeezed release. Well I shot him high but he dropped. It hit the spine so he could not go anywhere. I knocked another arrow and got a second shot where I hit the heart, he died quickly after that. Very proud of this deer and cannot wait to continue bow hunting them. Was a true rush and made me feel like that rookie all over again. Was a great hunt all the way around as the woods were alive. Heard wood ducks flying to the river, birds were singing their song, squirrels were doing their thing, turkeys were calling, and even heard a couple gobbles.

Now that I have killed a couple bucks,one with my middle son and this one, I am going to focus on a couple bigger deer I have on camera. Pressure is off with the bow so I am going to enjoy the season. Been hearing and seeing turkeys pretty regular as well so I always have them to get a smile from and hogs are showing up pretty regularly so I may can get a shot on one of them 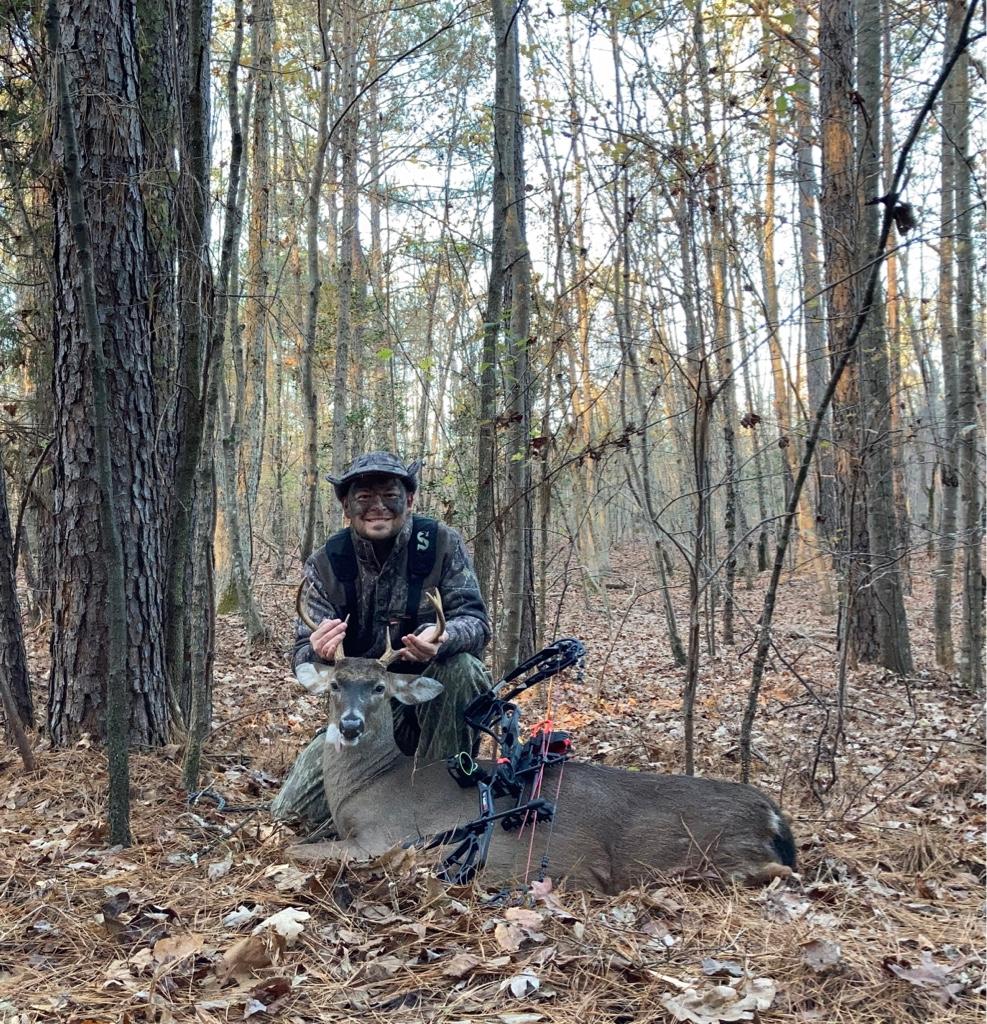 Congrats! Wow - he's got some dark color to him.
"Sit down wrong, and you're beat."
Jim Spencer
Top

Congratulations! Very nice buck!!
May I assume you're not here to inquire about the alcohol or the tobacco?
I am the man from Nantucket.
“Leave the gun, take the cannoli” -Clemensa
When attacked by a group of clowns...Go for the Juggler!!
Top

Awesome to get that first one. Congratulations! Back in September, after many years hunting deer with ML and rifle I purchased a crossbow and took a mature 8 point at 7 yards within an hour of sitting up. As I'm a older geezer with a bum shoulder I have a state disabled cross bow permit. Really like this thing.

May I assume you're not here to inquire about the alcohol or the tobacco?
I am the man from Nantucket.
“Leave the gun, take the cannoli” -Clemensa
When attacked by a group of clowns...Go for the Juggler!!
Top

Congratulations!!!! You’re off to an awesome start!!!!!
Top

Congrats and continue to pursue other critters on yer' list

Dandy buck! I love how hunting but due to my right eye messed up I’m using a crossbow.
“Ego is the anesthesia to dull the pain of stupidity”
Spoken by someone smarter than I
Top

I love it! Congratulations on a great deer! Your rugged determination to stay with it is always a pathway to success! Good luck with the hogs! That could be fun!!
Happy Thanksgiving!!
Mike
May I assume you're not here to inquire about the alcohol or the tobacco?
I am the man from Nantucket.
“Leave the gun, take the cannoli” -Clemensa
When attacked by a group of clowns...Go for the Juggler!!
Top

Awesome, I hope your hooked!
Top

You know you disqualified yourself from ever being President.
Double Naught Spy!
RCD's Owner----------------Badonka Deke Prostaff
MoHo's Prostaff-------------Lighter Than HTL Shooter
The Storm Whistle Prostaff
Top

May I assume you're not here to inquire about the alcohol or the tobacco?
I am the man from Nantucket.
“Leave the gun, take the cannoli” -Clemensa
When attacked by a group of clowns...Go for the Juggler!!
Top

Excellant job!
Thank you Lord for creating these wonderful birds and allowing us to chase after them.
Top
Post Reply
18 posts • Page 1 of 1

Users browsing this forum: No registered users and 43 guests